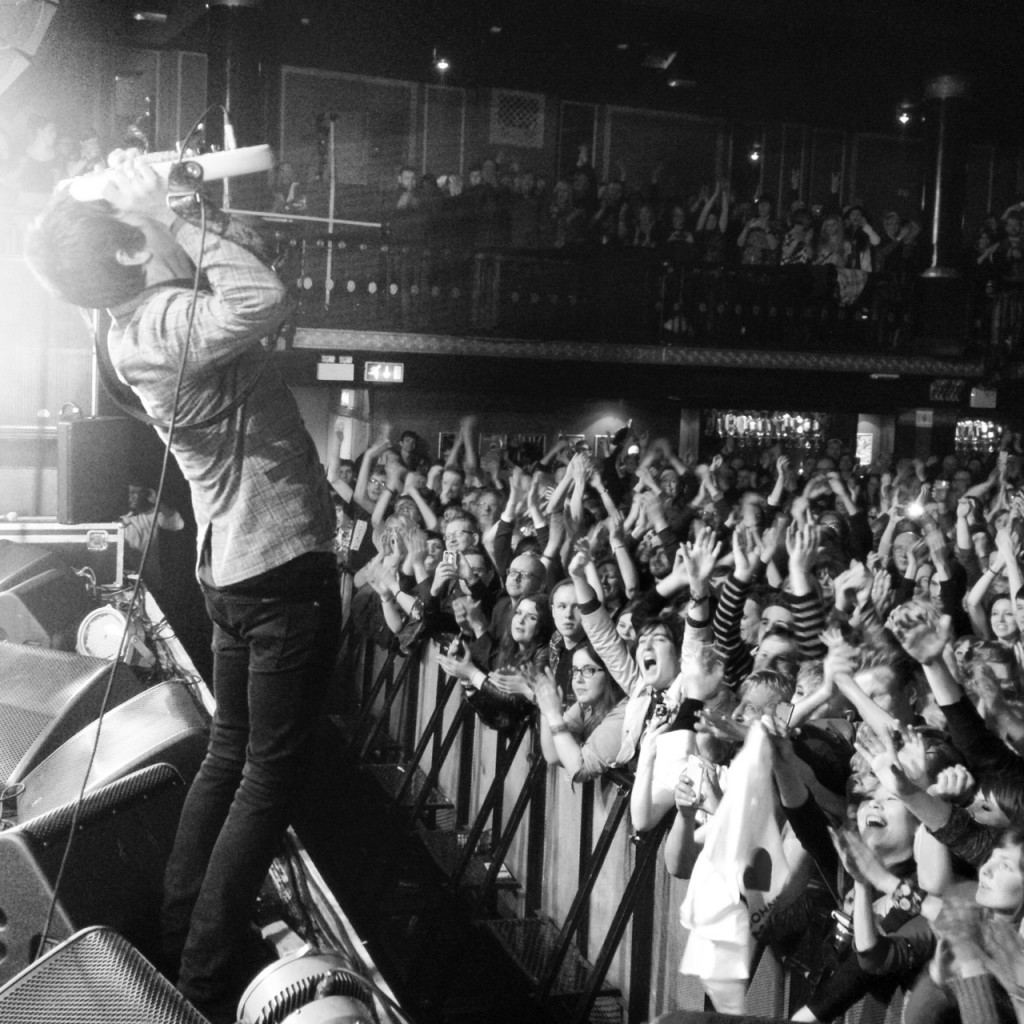 You are now a professor, a doctor, and a Godlike Genius. Which title are you most proud of?

Well, Godlike Genius seems to have been more important to fans so that’s been nice. I’m called “Johnny Fuckin’ Marr” all the time now anyway.

What was the biggest highlight of your UK tour?

There’s been quite a few highlights; for “Getting Away With It” in Glasgow there was a mirrorball the size of a car and that was quite a moment when we went into the guitar break. The whole place looked like a black and white movie — very beautiful. Hmmm…I think the Manchester Ritz weekend was a big deal for everybody. The homecoming always feels like an event and the shows were pretty charged.

There aren’t too many obvious things. My own situation has been pretty set for a long time. I kind of do what I want, but the one thing is that I can’t slope off quite so easily. We did a TV date the other day and the camera crew were with me all day, everywhere I went. I can’t take off so easy when journalists show up. Festivals are tricky for that stuff because I want to check out other bands or have a look around while someone else takes care of the media. The band go and find pancakes.

How do you cope with jet lag?

I don’t really cope with it, I just go with it and see what happens. I get jet lag even when I’m not on tour now. It’s become a habit or a syndrome or whatever. I can go to sleep at midnight and wake up at 1:15 A.M. and goof around playing or reading. I often rope a friend into going out for a long drive and park up somewhere to watch the city wake up. I’ve always liked driving at night. My sleeping patterns are interesting.

“Say Demesne” is my favorite song off ‘The Messenger.’ I was shocked when I first heard it because it reveals another side to your songwriting. It’s pretty dark sounding, and a little ominous. What can you tell me about the genesis of that song?

I had the music for that song first. It suggested a movie or a cinematic situation but I wanted to keep it about something real and grounded in reality. I didn’t want it to be virtual. I thought it would be good if it was saying something about the streets where I’m from or about real life. Even though it’s a story about someone who works on the street, it’s also about friendship, and about being broken inside, but trying to find beauty… in friendship, self repair, strangers…hmmm. 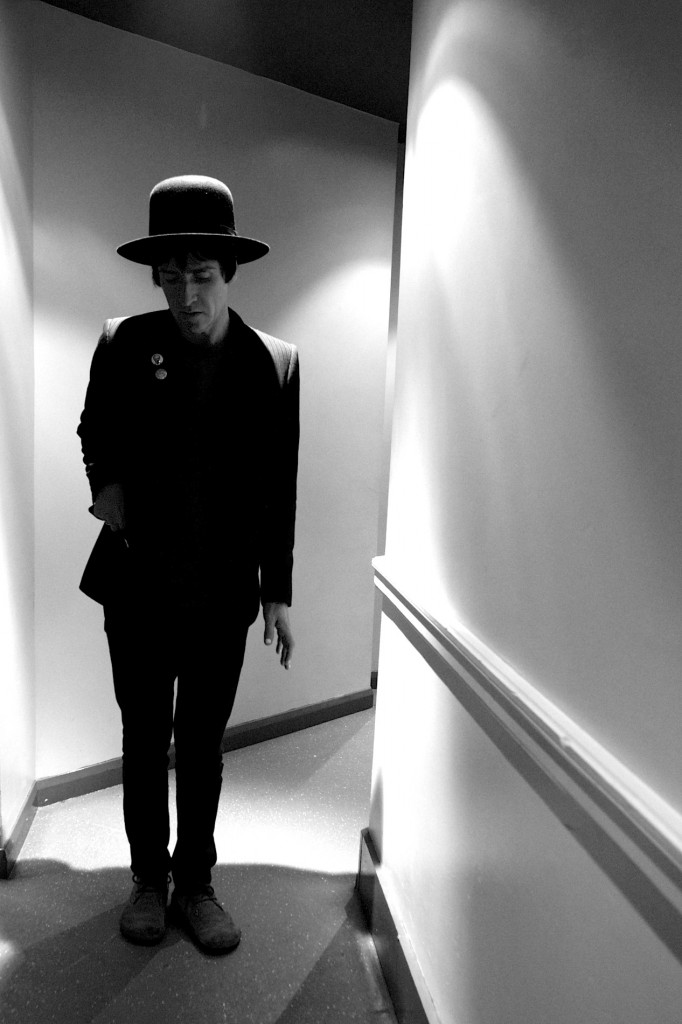 Were there any obstacles you had to overcome to create this album?

There were some obstacles but they’re technical boring things like getting the equipment right for the sounds. There are responsibilities and it takes time to be the producer of all the music. Technical things can be obstacles when you want  to get on with singing and playing. I produced the album and engineered it as well as played and sung, etc. That’s quite an undertaking work-wise. Doviak engineered and co-produced it with me so that was a help.

You’ve said in a few interviews that you prefer writing songs that are less emotional and more intellectual. This seems counterintuitive to me since you seem like the kind of person who is in touch with his emotions.  Can you explain this preference?

I didn’t want to sing about my emotions particularly and I had to explain this as there is nearly always an assumption made by people that songs must be about deep emotions. Weird. Why should they? If you think about it that’s a very narrow idea. That’s a bit like saying all graphic design must represent your emotional state, or all novels. Also, I’ve had to deal with people, and particularly people interviewing me, coming to this record with tons of assumptions, you know, like I write a track and then sit by a window chewing on a pencil and saying to myself “Hmm, now what do I write?” Funny. So many of the songs are led by the words.

How do you write lyrics? Do the concepts or the words come to you first? Do you write the lyrics or the music first?

I write things down that I think would be interesting for a song — a phrase or subject. Sometimes the music leads the way to an attitude or will suggest something. Songwriting is such a good thing because a notion can be made into poetry, poetry that moves at the speed of life, and works with electric guitars and drums. That’s the best poetry to me.

Will there be anymore singles or videos from this album?

“New Town Velocity” will be the next single. I have to make the video for it. I’ve enjoyed making the videos for this record, which is unusual for me but makes sense as they’ve been under my control — myself and my friend Mat Bancroft from Subset. Mat DJs at the shows sometime. He also did the sleeves with me.

Will there be any guest musicians joining you on stage during any of your US shows?

Yes, I think so. I like the moments when you can invite another musician and friends up to play. It’s a nice thing for the audience too. Justin from The Vaccines played with me recently. And Ronnie Wood.

Do you have any guest musicians planned yet?  Or anyone in mind?

No, I’m not sure yet. Nick Zinner (Yeah Yeah Yeahs) is someone I’d like to do something with. I love Nick.

Are you recognized less often in the US than the UK and, if so, does this afford you more freedom to explore the cities you visit?

I’m recognized less in the US and that does make it easier when you’re looking around. Most people who recognize you are very very nice and that’s fine. Getting pictures taken in airports or when you’re in a gallery can be awkward. It’s not a big deal though.

What are your favorite US cities and why?

Portland Oregon, obviously. I have friends there and I really like the atmosphere of the place. It’s quite easy going. I have a good connection with New York that goes back to the first Smiths shows and my time with The The. The speed of New York is stimulating. I mixed my album there.

Is there anything you look forward to in the US that you can’t do/buy/eat/etc. anywhere else?

Sriracha. I am a fan, as you know. I hear there are a few varieties around so I will be checking that out for sure. I like the galleries in New York. I’m always interested in good electronic music. Berlin is usually good for that.

Have you heard about the new Sriracha flavored potato chips by Lay’s?  You might want to bring an empty suitcase just in case they’re fabulous.

Yes, I have tried them. Pretty spectacular.

What can you tell me about the guys in your current band?

The band are really great. I’ve known them all a long time. Iwan Gronow plays bass. He was with me at the Patti Smith Meltdown shows at the Royal Festival Hall in 2005. Jack Mitchell I first met when he was in Haven, with Iwan, and I produced them in…2001? I’ve always loved Jack’s playing and his sound. He plays the drums on the album. Doviak is on guitar and keyboards. A friend told me about him when I was getting the Healers together in 2000 or something. He is a clever guy. 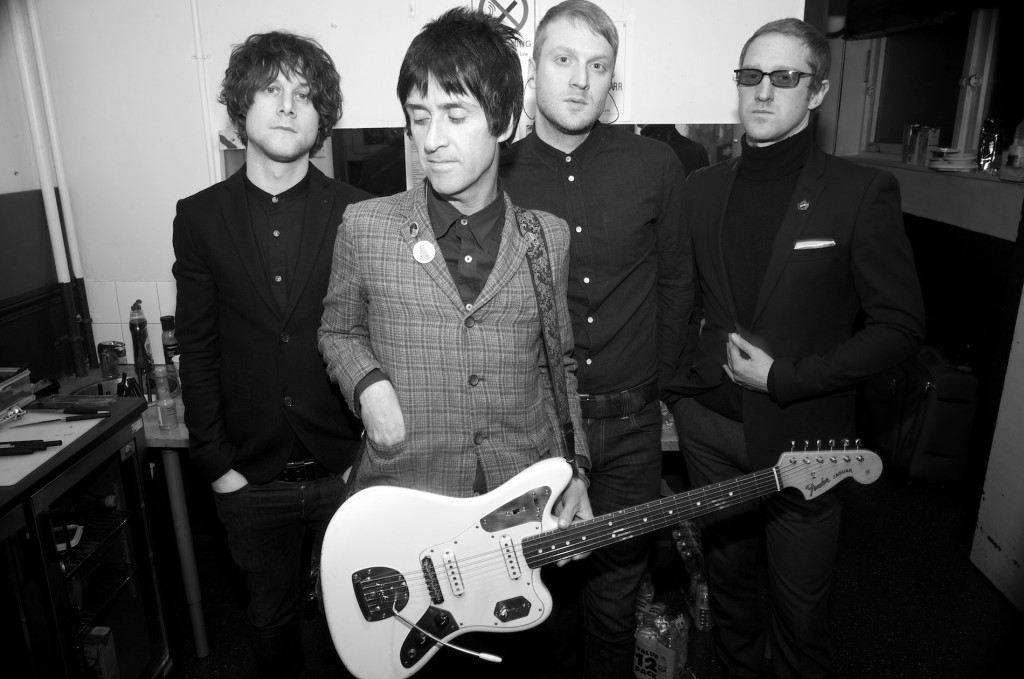 Are there any noticeable differences between your UK and US fans?

There are quite a few younger people at the UK shows at this point. I don’t know if that will be the same in the US. They know the new songs better than the old songs and that is pretty cool. There are, of course, people who go back with me who have been there since The The or Electronic and from The Smiths days too. It’s a nice mix.

Has your presence on Twitter had any effect on your relationship with your fans? Has touring made these changes more obvious to you?

Sure, I’ve got to see that quite a lot of them are pretty funny, and quite quirky, which I like of course. I feel like I have a good relationship with fans. I do like them.

What songs from your new album do you enjoy performing the most?

“Right Thing Right” is a good kicker-offer. “Upstarts” gets everyone stomping. “The Messenger” is an unusual sound, I guess. “New Town Velocity” is often a nice moment. I could go through every one of the new ones and say something good. All the new songs were written with the live situation in mind a bit, so it’s logical that they work for me.

Which of your older songs are the most fun to play?

There are so many old songs to choose from now. “Bigmouth” is fun as I always liked it. The band really do a good job of it, as they do on all of them. I’m very happy to be playing “Forbidden City” as Electronic never got to play that song live. “Getting Away With It” goes down very well too.

Do you plan to keep up with your running while on this tour, or do you think you’ll be too busy?

I always try to find the time to get out and see the environment. It’s good for the mind as well as the body. I’ll pull the hoodie up and get out when I can.

At this point in your life what is your worst vice?

Good question, er… I hit the Coca Cola during shows and after too. I’m a bad, bad man. Crazy rock ‘n’ roll. I don’t think pot is a terrible thing, to be honest, but I myself always have so much stuff going on that I can’t be bothered with confusion, or slowing down too much. I need a vice, a new one. I’ll get one. 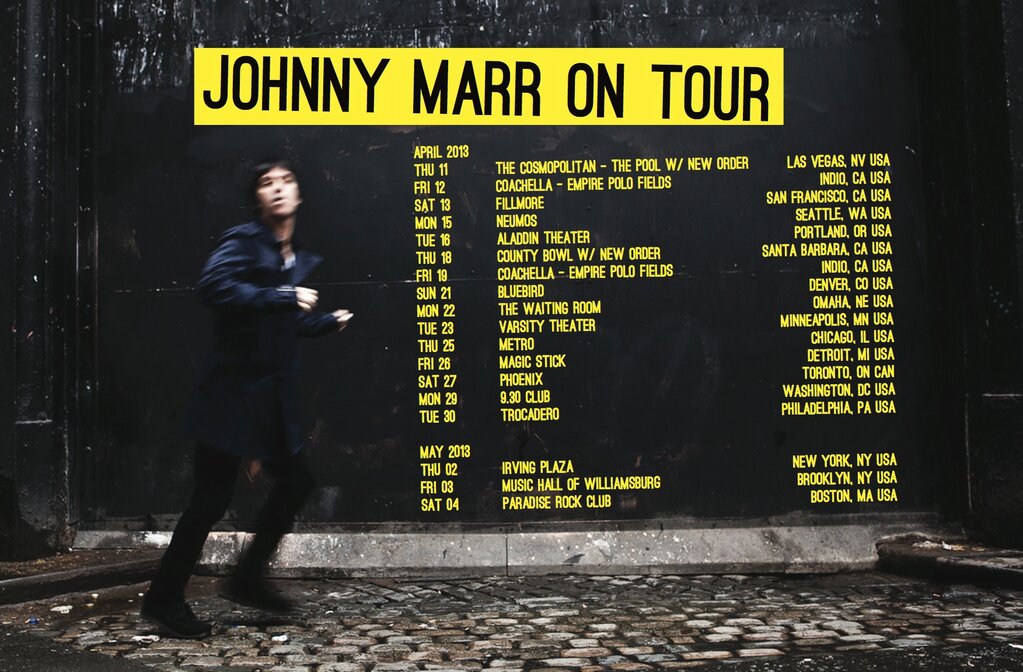 Leave a Reply to chris Cancel