At what age did people start to recognize that you had artistic talent?

By second or third grade I can remember some of my classmates (boys anyway) showing interest in my monster drawings. And while there was probably no denying that in this area I was a step or two ahead of my peers, its hard to say whether this was due to a natural born talent or just the fact that I spent so much of my goddamn time doing it.

I recently put your question to my parents, and all my mother could come up with was that she recalled my older brother showing a lot of promise from an early age but that he didn’t pursue it, whereas I did. Not exactly the answer I was fishing for, but it does illustrate my point. 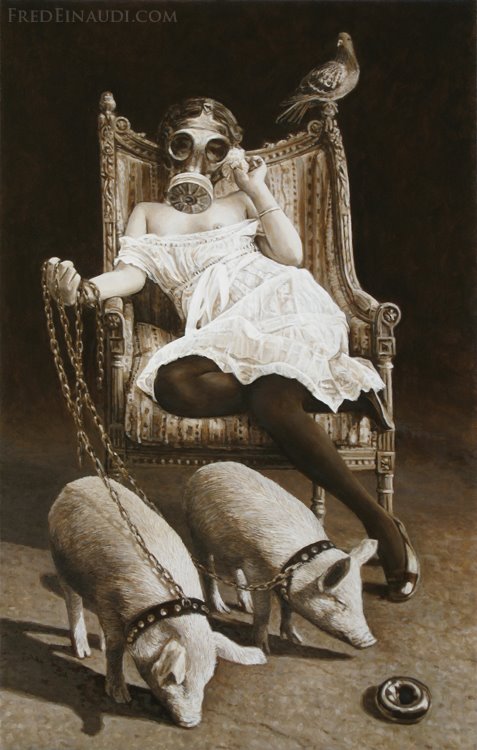 Did you go to art school? What kind of artistic training have you had?

I did one year of art school, but then dropped out. I’ve never felt that academic environments were particularly well suited towards my temperament, and even the relative permissiveness of art school just ended up feeling like the same tedious continuum of the previous twelve years.

It was actually my high school art teacher, John Robinson, who had the greatest influence on my early development and subsequent pursuing of art. I consider myself incredibly fortunate to have crossed paths with the man. My parents were very supportive as well, but because they were my parents, I naturally took any encouragement from them with a grain of salt (particularly as I never seemed to be excelling at much else). 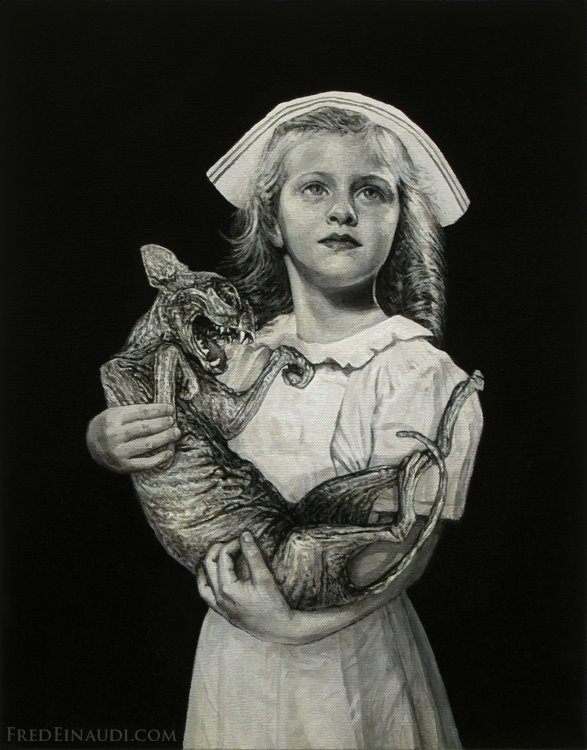 Do you currently have a job or career outside of painting?

Odd jobs, here and there. No career to speak of. If you’re willing to be poor, it’s pretty easy to get by without working much. I don’t have a cellphone, never owned a car, I live and work in a crappy apartment on a bad street; so my cost of living is pretty minimal.

Do you paint in oils or acrylics? Or both?

Oils were my first real love, and to this day they’re what feel most natural and what I understand best. In the last few years though I’ve managed to deep-six a long-standing superstitious prejudice of acrylics and have found them to be not nearly so sinister as I once thought. Theres a prevalent tendency to regard oil as somehow more valid or compelling than its less charismatic younger sister acrylic, due in part to its historical record, but also to some less tangible quality that seems to border on alchemy. These days though, I’m trying not to subscribe to the sentimental hierarchy of art supplies. I’d like to think that any given medium is merely a tool at the disposal of the author, and has no inherent virtue of its own. Even something as lackluster as a dog turd should, in the right hands, be able to be used to good effect as a crayon… 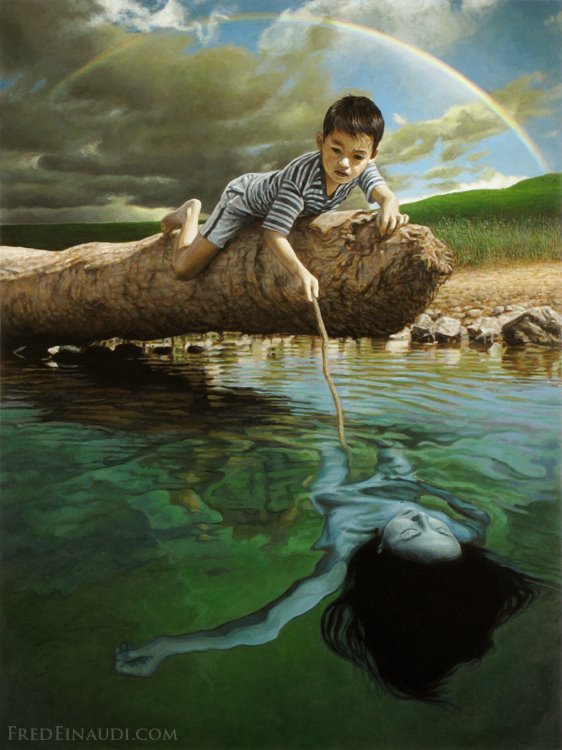 Are you working on any paintings currently?

I usually have about a dozen or so in varying forms of incompletion (though right now I believe the number is closer to twenty), of which maybe half will live to see the light of day. I can sometimes sit on a painting for a year or more before I figure out whats wrong with it, and correct it (or scrap it altogether), so it’s necessary to have other pictures I can turn to in the down time.

Which of your paintings is your favorite? Why?

Whichever painting is in its earliest stage of development is generally my favorite (which is another reason for starting more pictures than I finish). It is then that its most open to change, and that’s kinda exciting. The possibilities naturally become fewer as the painting moves further along towards its inevitable conclusion. By the time I am done with the picture, I am usually well over it and am tired of looking at the thing (and after a time, if and when I do, all I can see are the aspects I’m unhappy with). For this reason I seldom look at my finished pieces (though of course, even referring to a painting as “finished” is already a bit of a misnomer, as pictures are rarely anything more than the visual evidence of an uneasy compromise the painter has made with the canvas, and thus incomplete by nature. Really, any given artist’s body of work is just a long series of aborted attempts at an ideal. All the same, this is not so depressing as it sounds, and is perhaps what lies behind the drive to continue to the next piece: the desire to finally get one picture exactly right.). 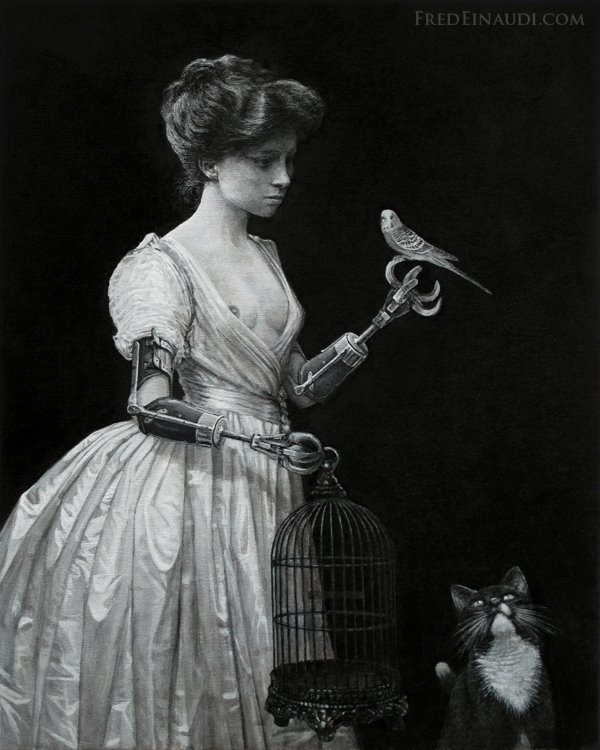 If you hadn’t become a painter what do you think your career would have been? Did you have any interests that rivaled painting?

When I was in high school, there was a “career day” in which each student filled out a questionnaire, and from the answers a line of work was suggested that was considered most applicable to him or her. According to my results, I would probably have been better off driving a bus.

Do other painters mostly inspire you or discourage you? (I ask this because I went to art school and I tend to get discouraged when I enjoy other painters, including you.)

I will admit that some of Andrew Wyeth’s paintings make me consider traveling to Maine in order to dig up his corpse and consume whatever rot remains in his brain case, on the off-chance that doing so would make me a better painter (allowing that it didn’t kill me first). In truth though, I’m not much for travel, and the last time I dug something as deep as a grave it took me the better part of a week and blistered the hell out of my hands, so Im afraid I will probably just have to learn to live with my jealousy.

That being said, I think one ultimately paints, not in order to become as good or better than ones influences, but because there are pictures out there that don’t exist and which you have a need to see. So you work with what you have, “talent” be damned. Coming from this perspective, being inspired or discouraged by someone else’s work isn’t particularly relevant. Personally though, if viewing others’ artworks fucks with your ability to make your own, I would stop doing it, as I think it preferable to make pictures than view them. 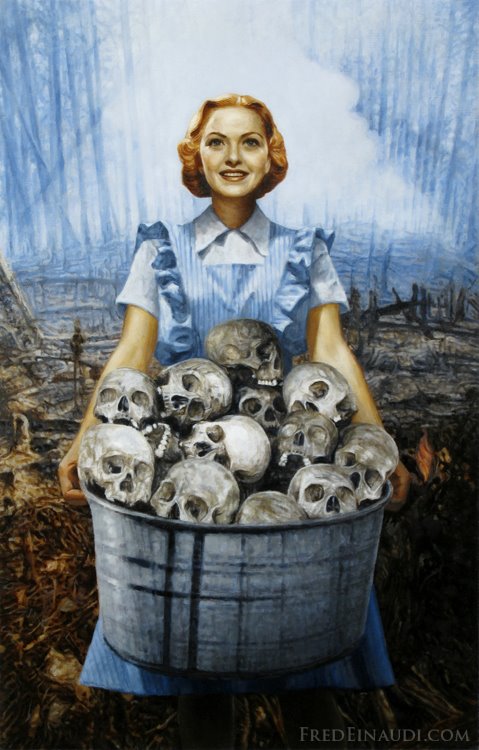 Do you ever feel discouraged or unhappy with the world of fine art? If so, why? Would you change anything about how art is produced and experienced if you could?

(Again, I ask this because I went to art school. I felt unhappy in that world due to the narrow view of what constitutes good art at any given time, the art-speak that I was expected to adopt in order to communicate with artists, galleries, art historians, etc., and the hard-assed, dog-eat-dog attitude of many people I encountered.)

‘Art’ and ‘the world of fine art’ are two very separate beasts, and I find it best not to bother myself with the one which feeds off the other (as any organism interacts with parasites at its own peril). Though I wouldn’t go as far as to say that all institutions surrounding the sale, collection, instruction and/or discussion of art (and those who work within their walls) are inherently evil, the art world does tend to attract more than its fair share of both the greedy and the shallow. Artists, who by their very nature spend a disproportionate amount of time by themselves (and are therefore less practiced in the art of communication), tend to be easy prey for those looking to take advantage.

But truly, the business end of things has very little to do with the actual art itself and its creation (unless one is talking about corporate or public funded art, of which I know next to nothing, and therefore cannot speak of). Your artwork, my artwork: its all in the making; in the solitary hours of thought, play, and material manipulation. What comes after, when “culture” moves in and has it’s way with the remains, cant have any effect on that.

Regarding the art-speak you mention: I see it for the most part as a fairly bogus language that’s been created in an attempt to fill the perceived gaps inherent in a medium that’s not given to straightforward reading. The problem being that the basic impulse to expect that anything can eventually be decoded given enough verbiage, while perhaps understandable on the surface, is woefully ignorant of art’s true value, which is far more elusive than simple translation would ever allow for. As a tool language is about as useful at parsing “meaning” from an image as a fork would be in delivering a baby.

As for what I would change about the world of art, if I could… The Internet has already done so much in the last ten years to redress the public’s relationship to art, art viewing and the artists themselves, I’m not sure anything really need be done, other than to let time continue to run its course.

What would you change about the world if you could?

To my mind, probably the simplest approach to the worlds ills would be to just randomly neuter 99.95% of the population. There’d still be more than enough virile humans left to breed us back up to damage doing numbers in a couple millennia, but in the meantime it would give the earth a little time to rest and recuperate. 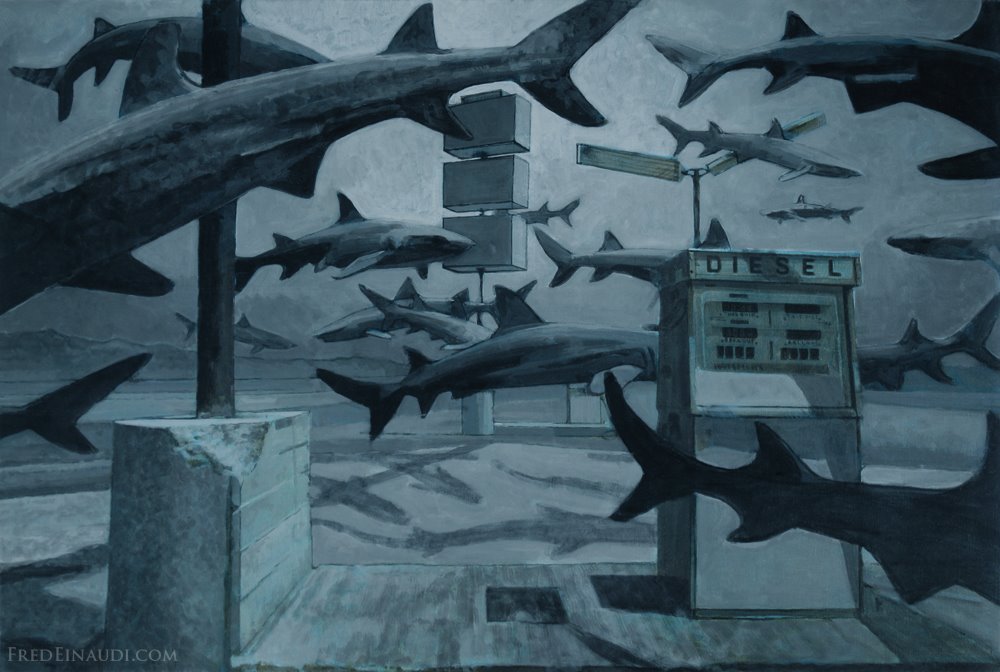 The Paintings Of Fred Einaudi